We all know when the time has come and it’s never easy. In this case it is very much a “it’s not you it’s me” scenario.

I sold my Suzuki a couple years ago and had no issues waving goodbye as it was loaded on the trailer. I didn’t not like her and she didn’t do anything to cause me to sell her. I just knew it was time for me to move on and move on I did. I moved right on to my Vulcan S, which was newer, shinier and zippier. Today i said good bye to my newer, shinier and zipper bike and it really kinda sucked.

In two years I put on roughly 34,000 km but it’s not just about the places that we went it was about the memories that were created while riding her. Andy and I went on dates all over southern Ontario, I went on girls weekends, I rode with friends to beaches and lunches and just to get away for the day. That being said none of those memories gets you any additional money to deposit into your bank account! 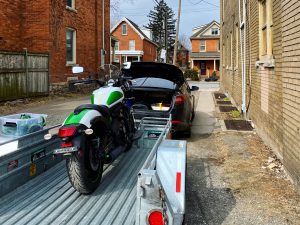 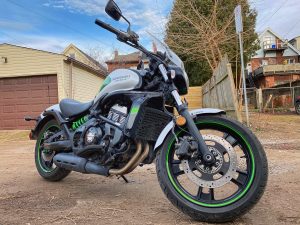 When I bought my Yamaha towards the end of last summer our full intention was to sell the Vulcan S but as the days went by we started talking about keeping her for city riding and back and forth to worth. I was very excited about this plan and then – well shit got real. At the end of October I stopped working and then with all the recent uncertainty around Covid-19 we knew we just couldn’t keep her for a run around bike and that the money could be used elsewhere. Being in denial I listed her on Kijiji last week, not Facebook because I knew she’d sell quicker there lol. Well the inquiries started to come, yes I had some stupid ones, but the majority were serious.

This morning a gentleman from Windsor showed up with a trailer and cheque so off she went to her new home. As I waved goodbye to the gentleman I wished him well and wished him many kilometres of safe riding and who knows maybe oneway our paths will cross when we’re out and about. However, what I didn’t expect was the sadness I felt and the tears that trickled down my cheeks – saying good bye is hard! I’m not sure if it’s that I’ve had to say goodbye to many things this year or it’s the emotional state of things right now but it was definitely harder than I expected, now I fully understand how our daughter felt all those years ago when she cried as we sold our trusty minivan. It wasn’t the van it was the memories and what it represented.

Thankfully I will still have all my memories of the fun times and great places that we went together….. 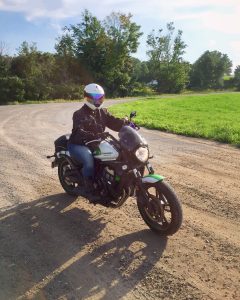 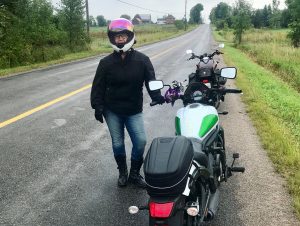 We women want better clothing choices. Clothes that are made for women!   As you...

I was perusing FortNine, as one does on a dull Wednesday afternoon, and came across...

Wishing the love of my life the happiest Father’

When you get can’t figure out where to head for

Thanks @bretstewart_realty we finally made it to F

Today was definitely a hot one here in the hammer

As some of you know I’ve currently gone back to