Before we get to this weeks edition of Crush & Covet we wanted to take a minute to remember Neil Peart who passed away last week after a battle with cancer. If you don’t know who he is, that’s OK however he’s been hailed as one of the best drummers of all time.  He was a motorcycle rider who happened to be in an incredibly successful band.  I would recommend you listen to some of his band’s vast catalogue of music, if rock is your thing, or try some of his books about his experiences and love of riding.  He often spoke and wrote about how he not only enjoyed riding but how it helped him cope with the tragedies of life and the stress of being on the road.  A talented writer, drummer and lyricist, he will be missed.

We have had a miserable fall and a slow descent into winter.  I have resisted the urge to sneak out for a quick ride during the few days that were warm enough to have a ride. (Note: my temperature limit is typically 5 degrees C or 41 degrees F).  In previous years, I had less compunction about wandering out during a warm spell and accepting that any salt from the roads that I picked up that did not rinse off easily would only add to the patina and charm of my ride.  However, in the last season, I bought a newer bike (2014) that is a bit of a looker (MG California Touring) and I have stayed off the road since the first salt truck sighting.

So for this week’s crush and covet, I am crushing on the virtues of a relatively new bike and coveting the laisse faire (that’s French for “don’t care if it gets dirty”) that can come from having an inexpensive, maybe older, bike.

In this last year, I entered into the luxury of a newish touring bike with many of the bells and whistles offered today.  ABS, Traction Control, Throttle by wire, preset power mapping, gel insert seat, luggage, etc. have all quickly started to spoil me during longer rides and trips.  These creature comforts have helped me extend and expand my riding for longer and more ambitious trips (see our description of our Superior Loop tour last summer).  I have found that the larger touring bike has not hindered my riding and is in fact a good match for my riding habits and style.  The MG California is powerful and heavy but handles well once underway and even sporty if pushed.  I would be tempted to call it a sport tourer if not for the charming but tractor like transmission and the large top box that came with it.  I have a cousin who rides a Goldwing and he says much the same – he loves his ‘Wing and will answer, point for point why it is better than his friend’s American cruisers – but he has yet to convert any of them.  For all these reasons and more, I love my newer, comfy, long legged, Italian machine. 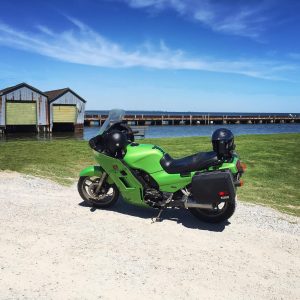 There is something about an older, battered survivor of a bike that I just can’t resist.  I think it is the thought that a scratch from a minor mishap will not shave thousands off the value that appeals to me.  Being a frugal (ed:  read cheapskate) person, I have always thought that a mechanically solid, but imperfect bike with some years on it was the best bang for the buck you could get.  Dropped it in the driveway during a slow speed maneuver?  The likely damage is probably not noticeable or at least easily fixed. That’s not to say I’m careless with an older bike but I feel more carefree on a beater that I’m not so concerned about a couple of scratches.  I would also say that a smaller, used bike is a good stepping stone for a new rider.  I know there are differing opinions but I am firmly in the camp of starting on something smaller and trading up as your skills improve.  Dropping a $30k dream bike in the first season of riding during a slow or no speed maneuver (and you will drop your bike that first year) is an expensive proposition, not to mention a 700+ lb dead weight laying on its side in your driveway.  I started on a 1978 200cc Kawasaki street bike with ~ 12.7hp (optimistically).  Was it a cool macho bike?  No!! It was a silly little runabout that moved through the city sprightly without any cool factor whatsoever.  But all the controls were the same as a large bike and, after I had made some mistakes, I moved up to a larger bike the next year and sold it for a little more than what I bought it.  Cost of riding is basically just maintenance and consumables (tires etc.).  For these reasons, I covet having an older bike again.

To finish this weeks post in the words of Neil Peart…..

As a few of you may have heard Andy and I bought a bike a...

Riding during a pandemic and using public bathrooms!

Why don’t people understand how much fun we are having? Why it is so hard...

Wishing the love of my life the happiest Father’

When you get can’t figure out where to head for

Thanks @bretstewart_realty we finally made it to F

Today was definitely a hot one here in the hammer

As some of you know I’ve currently gone back to