We’re a little late in getting out this weeks Crush and Covet as it’s been a busy week with our new little guy and appointments.

Last week we told you about our new little riding buddy Gibson. Since we’ve gotten him there has been lots of talk about riding with him this summer, what we need, what we want and research that needs to be done. We are realizing that there’s a little more to this whole idea that just getting a carrier and going. 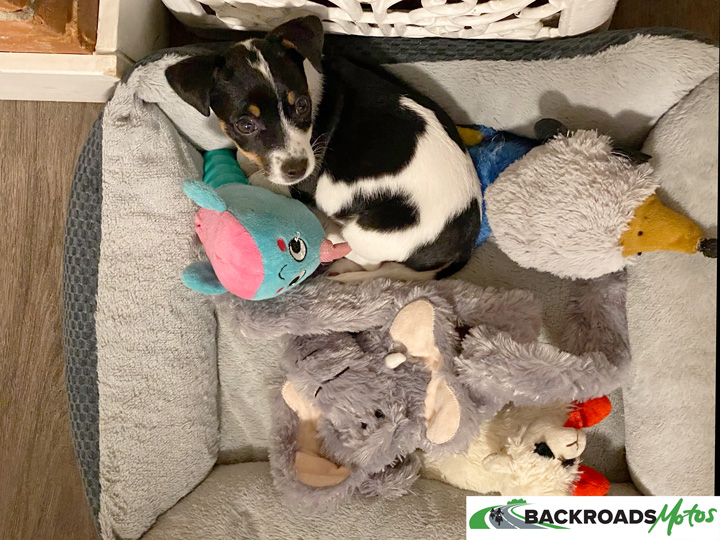 It should be no surprise that we are completely crushing on Gibson/Gibby. We are realizing every day that he’s a smart little guy that loves to entertain. He goes goes goes and then collapses – so he’s fitting in well around here. I’m trying to take him as many places as possible with me so he gets use to the motion of the vehicle as well as socializing him. We’ve also looked in to some training for him but he’s still a little too young.

Once the weather gets a little nicer we will take him out and sit on and start the bike just so he can get use to it. Hopefully we can decide on a carrier soon so he can also spend some time just sitting in it and getting use to it. The other thing we’ve been told to do is get him some goggles sooner rather than later so that he can start wearing them and gets use them – which leads me into this weeks covet!

While introducing Gibson on our instagram one of our followers told us about RexSpecs and we’ve been coveting them ever since – thanks @lordsanzo84 for the tip.

We knew that we needed protective eyewear for Gibson. After-all, we wouldn’t ride without eye proaction so why should he! Goggles for a dog helps keep any kind of debris out of his eyes as well as offers protection from the wind. These goggles come with a set of two lens so you can have one tinted and one clear because just like us dogs are also are susceptible to harmful UV rays that can severely damage their eyes.

We’ve been doing a lot of reading on them because we want to make the best choice possible and don’t want to buy something because of the way they look. Everything that we read has been positive and it seams that dogs and their owners seem to love these goggles. The only reason that we haven’t bought them yet is we’re worried that what fits him now won’t fit him later and well be don’t want to have to buy a second pair as they aren’t that cheap. Another worry of ours is that like us, Gibson accumulates way too much gear!

If you ride with your pet and have something that you love and/or works well please leave a comment below and let us know – this is a whole new thing for us.

ps. it should also not surprise any of you that Gibson now has his own Instagram 🙂

Wasn’t that a party – Burrbilly Girls Weekend 2018! This past weekend I had the...

As a few of you may have heard Andy and I bought a bike a...

A continuation from My First Bike… As I became a confident urban rider, I planned...