A continuation from My First Bike… 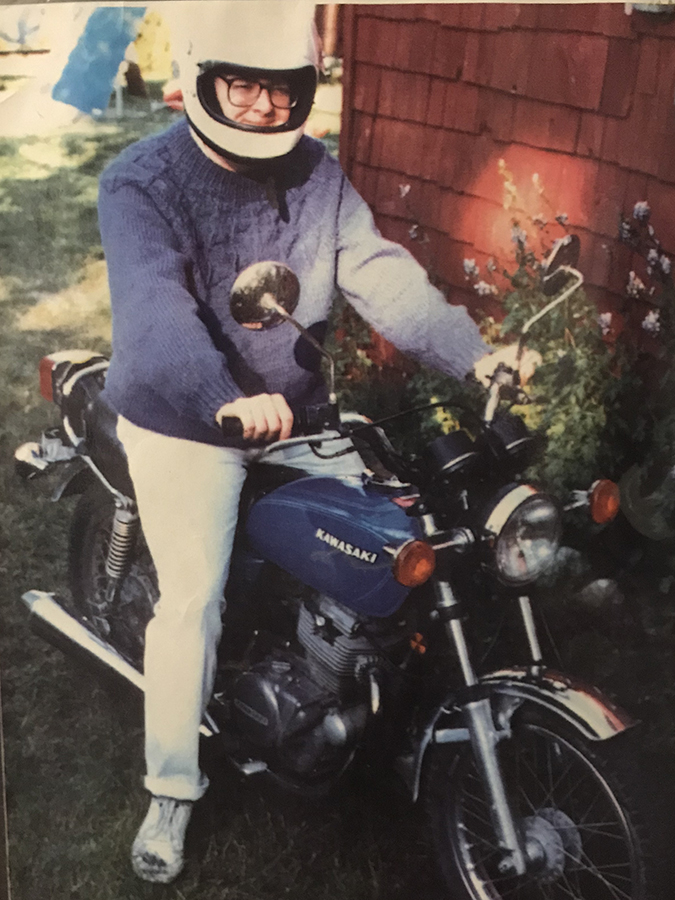 As I became a confident urban rider, I planned a longer trip.  I was to go up the Bruce to Tobermory, across Huron on the Chi-Cheemaun to my parent’s cottage at Mindemoya on Manitoulin Island.  I would spend a few days there and continue to Sudbury in time for my Grandfather’s operation and then back to Waterloo thereby circling Georgian Bay.  I had done each leg of this route in a car a few times and I felt confident that I and the KZ were up to it.

I set out with my sturdy little burro of a bike loaded with me, a tank bag and a small set of saddle bags that were made to put on a bicycle rack across the seat behind me.  Bright and early, I set out to get to Tobermory in plenty of time to get on the ferry (the Chi-Cheemaun) to the island.

The trip up the Bruce Peninsula was long and I was beat when I got to Tobermory.  Between my tiny bike, the wind and impatience of my fellow travellers I felt a little stressed when I got there.  However, I arrived earlier than I expected and discovered another advantage to travelling on a bike.  Instead of arriving and having to get in to the line of up to 100 cars waiting for the next departure, I was able to board the one about to leave.  Apparently, they will take bikes up to the last minute under the “we can always fit another bike in the ferry” doctrine.  So I was thrilled to ride through the line up to the front with the other two wheeled travellers.  I had the smallest bike by far (next was a Honda Silverwing GL500) and felt a little self-conscious.  No matter, I was made to feel welcome and they were happy to answer my questions about ferry etiquette and securing my bike.  I did pass on the offer of a swig of Wild Turkey from the kind (but kind of rough looking) gentleman on the Harley.

Once on Manitoulin Island, all my cares just melted away.  Having spent my summers there since I was small, being on the island is a trigger for me to relax and revert to the here and now.  I de-ferried (is that a word?) and, knowing that Highway 6 would be filled with impatient cars behind me as the only route from South Baymouth, I pulled off and had a little rest to let them unload and head off.   Then I set off to my parent’s cottage on Lake Mindemoya.  For me, riding on Manitoulin is just about as good as it gets.  The island is beautiful, the people are friendly and the roads fit me to a tee.   I like a nice curving road that I can enjoy the scenery without feeling rushed.  I had plenty of time so I zigzagged my way to the interior of the island and eventually to my parent’s cottage to stay for a few days.

After a couple of days, I set out for Sudbury – a short distance of about 100 miles (160 km).  This leg I knew like the back of my hand.  The route went like this:  Lake Mindemoya to West Bay (now named M’Ching), across the island to Little Current, across the swing bridge (definitely a sight to see) to the causeways skipping through a series of small islands towards the White Hills, over the White Hills to Espanola and then turn right onto 17 towards Sudbury.   I knew the route and felt confident.  My biggest concern was that my little bike was going to struggle on the White Hills.  If you are old enough you might recognize the area as the setting for Rainbow Country (a Canadian young adult adventure TV series featuring a blond kid always getting into trouble and a sensible native kid who was always getting him out of trouble).   The ride through the White Hills was beautiful and dramatic – beautiful scenery from all sides and drama from my little, underpowered bike struggling up the hills.

I lost power and the engine cut out somewhere between the turn onto Highway 17 and Nairn Centre.  The engine cut out and I lost all power.   I had been having problems with bulb burning out on the bike but this was a definite escalation.  I got it going again but it died again near Lively.  No power and I could not bump start it. After calling my brother who lived nearby and taking the bike to a local shop in Sudbury.  My rectifier had failed, overcharging the battery, boiling off the water and generally wreaking havoc on my electrical system.  Luckily, the mechanic had a KZ650 (beautiful bike)he was restoring so he swapped out the rectifier for me and ordered a replacement for himself.  Replace the headlight bulb and all the signal bulbs (which had burned out) and I was back in business.

Sudbury Back to Waterloo

My Grandfather had a successful bypass surgery (props to the folks at Sudbury General) and even at 75 was recovering fast.  Within 24 hours of his surgery he was able to let me know he was alright and show his mild disapproval of my beard.  He was soon back to being the positive, optimistic person that was his natural state.

So, I set out back to Waterloo.  This being Sudbury and around the start of September, it was cold setting out in the early morning.  I did stop for some heavier, lined leather gloves (thank you Highway 69 Trading Post) and persevered.  I will say a couple of things about Highway 69 back then (1989).  There was a lot less multilane with only the occasional passing lane.  The bugs were huge (no windshield, just a full face helmet).  And people in RVs have no patience for a guy on a small bike.  It was scary having a 30 foot Winnebago bearing down on me when I had buried the throttle and had nowhere to go.   Slowing down to get a tailgater to back off is even scarier when it looks like a small house.

Rest of the trip was uneventful and I arrived back at school with the realization that if I wanted to go any distance, I needed more than my little Kawi KZ200 (185lbs and estimated 12 hp.) taking me down the road.  As small as it was for trips, that bike was the most fun for the money I have ever had.

Friday, August 5th Following the long weekend, CL and I decided that we wanted to...

Since the recent Ontario Election, I’ve been turning an idea over in my head.  ...