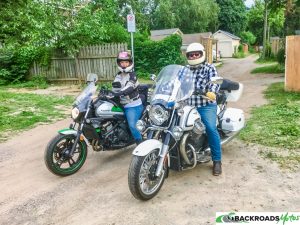 The Planning was fun but it had nothing on the ride!

As our trip got closer and closer we started watching the weather. We had no idea that when you start riding a bike you also become a meteorologist! We had planned to leave the morning of the 6th as we had the ferry already booked for that afternoon however, it was showing a bunch or rain starting from around midnight on the 5th and not letting up so we left after work on the 5th instead. We’re ok riding in the rain but if if we don’t have to why would we? We headed to Magnuson Hotel in Listowel, far enough away to skip the rain but not far enough that we would be riding into the dark.

Day 1 – Listowel to Tobermory (by way of Kincardine)

Let’s get the most important thing out of the way first- Happy Birthday Cherie-Lynn!

A brief word about driving in Sudbury.  Not to disparage the whole area but we had three close calls in and around Sudbury, by inattentive (and in one case aggressive) pick-up drivers.  Coincidence?  I don’t know but I would advise a heads-up attitude while going through the area.

Day 12 Pembroke to Thomasburg (The Farm)

This day saw some amazing roads. The Highlands are well known for their sweeping curves and inclines. We’ve risen here a few times and yet there’s still so much more to discover. The place we rode through this day on our way to Cherie-Lynn’s dad’s farm were;

Day 13 Thomasburg (The Farm) to Home

We do have some video from our adventure that we’ll get uploaded to Youtube and show you some of the road to Copper Harbour, the ride on and off the ferry, the guy tipping his bike over on the ferry, along with a few other tidbits.

We all know when the time has come and it’s never easy. In this case...

Wasn’t that a party – Burrbilly Girls Weekend 2018! This past weekend I had the...

A continuation from My First Bike… As I became a confident urban rider, I planned...