This year for my birthday I got myself a gift – my motorcycle licence!

I’ve been riding two up with Andy for a while and finally made the leap to getting my own bike. Although we’ve talked about it for a while now it wasn’t until we went away for Canada Day weekend with another couple that both ride.Chatting with Mary about her bike and seeing how well she handled it I know it was something that I finally wanted to do.

Fast forward a few days to the 6th when I went to write my M1 – and failed! Yes I failed. I downloaded the M1 test questions and practiced until I wasn’t making any mistakes so the morning of the 6th (my birthday) I went to Service Ontario, waited 2.5 hours and did my test. Well I had no idea that I needed to write my G1 as well as my M1 test. I scored perfect on my M1, the signs portion of my G1 and got 4 wrong on the rules part of my G1. Every question I got wrong had to do with the rules surrounding the new G1 rules. Have i mentioned that I’ve been driving for 20 years and then it was called 365 and other than having a licensed driver ride in the passenger seat i don’t rememberer anything else. Needless to say I went back the next day and wrote the rules portion and scored perfectly.

The 6th was a Thursday, I got my licence on the 7th so of course I bought a bike on the 8th and picked it up on the 10th! Andy mentions every now and than that I’m impatient. I like to think that I’m efficient 🙂

I bought a small beginner bike from a very nice woman off of Kijiji.

Suzuki Marauder 250 and I love it. I know I won’t keep it for long and I’m ok with that. This is what I chose and I’m thrilled. 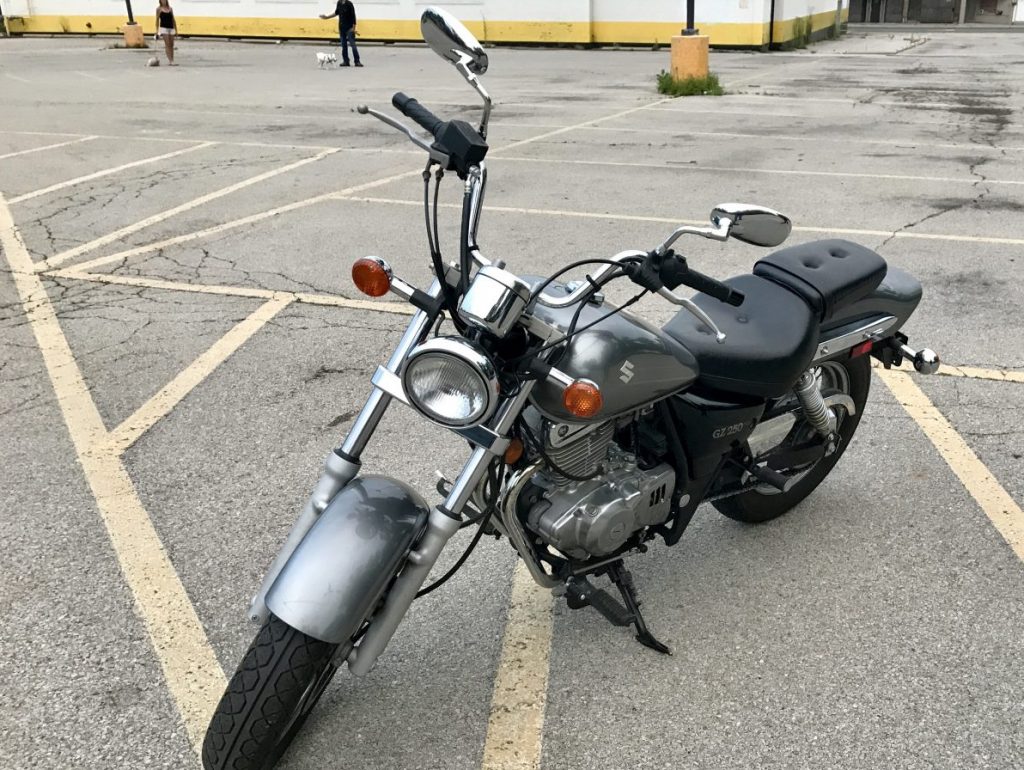 Every night after dinner Andy would drive it over to an empty No Frills parking lot and teach me a few basics. He was really carefully not to teach me to much as he didn’t want to pass any of his bad habits onto me. I had signed up for the M2 Gearing Up Canadian Motorcycle Association course and he was just helping me get ready.

After waiting a couple weeks for my course it was go time. To say I was a little excited come Friday was and understatement. I went to my classroom session on Friday night and it wasn’t until I was walking into the room that the thought “Oh hell what have I done” crept into my head. The class size was about 20 people (4 being being women). Our four instructors kept thing light and fun while helping us understand the responsibility of driving a motorcycle.

Saturday morning seen us pushing – yes pushing, each other around on the small bikes that were provided to us. This was helping us feel comfortable with the bike. It was at this portion of the course that I decided that I didn’t need to go in a road with curves. I was content just going straight 🙂

By the end of the weekend I was having a blast and even turning to the right and left and doing mock road curves. The one thing that shocked me after each day was how tired I was. I’ve always rode on the back and had no idea that driving a motorcycle was so tiring. I’m happy to say that at the end of the weekend I passed the ministry test and was on to my M2. In 18 months I can head back and do my M2 exit course at which time I’ll be a full M driver.

All so often when we talk about hitting the open road its destinations, routes, fuel...

In January we attended the Toronto Motorcycle Super Show and of course we went with...

Welcome to our first edition of Crush and Covet! I will be the first to...