As many of you know 2017 was my first summer riding my own bike. I was always content to ride behind Andy and chat along, take photos and on occasion I even worked, thank god for smart phones where our offices can be where ever we choose them to be.

I often get asked why I decided to get my own bike so here it is – I just needed to.

A couple of years ago at the end of the season we were out riding and I wanted to go back to look at something so Andy found a parking lot to turn around and for those that ride you know that going slow is when most accidents happen. Well we went down, not hard but hard enough to scare us, once we got our bearings we were able to pick the bike up and ride it home. I rode a bit afterwards and was very nervous and before we knew it it was time to put the bike away for the winter. Well the next spring came I was still having issues with my nerves. A few times Andy could tell that he needed to stop. Without me saying a word he knew I was having an anxiety attack. I was fine when we were flat-out riding but going slow and turning was hard on me and therefore hard on Andy. That summer I still enjoyed the bike but not like before. Once agin, before we knew it it was time to put the bike away for another winter.

Enter 2017. When we would drive in the car I had issues. Andy knew it was easier on my if I drove as he started riding in the passenger’s seat more. The spring rolled around and it was time to get out riding I was better but I was still anxious. Canada Day weekend came around and some family invited us to come ride with them up on the Bruce. Well after seeing Andy’s cousin Mary handling her bike and seeing the pure joy it bought her I knew what I was going to do that coming week! 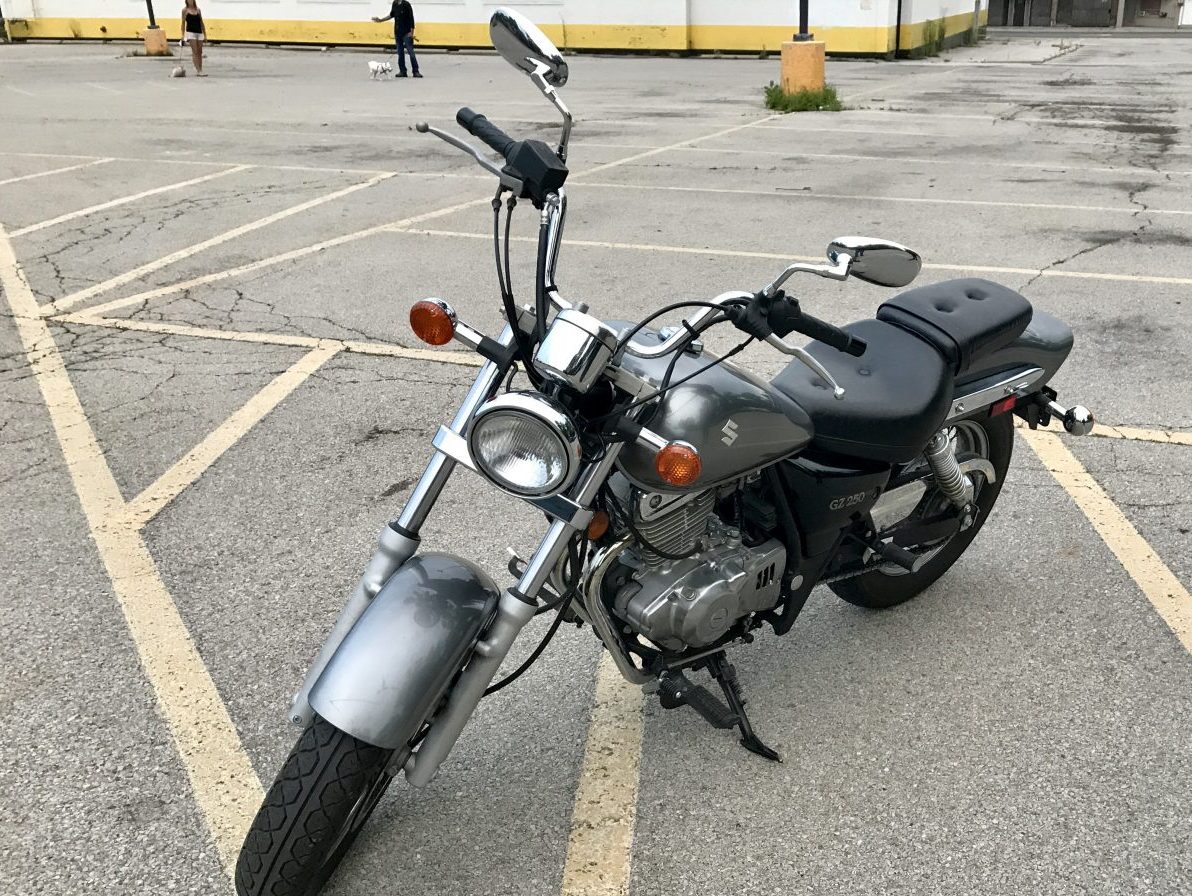 For my birthday I went and wrote my M1 – and failed 🙁 I went in not knowing that I had to write my whole G1. I thought because I was already a licensed driver (of over 20 years) that I just would have to write the motorcycle part – I was wrong. I’m happy to say that I got all the questions regarding the motorcycle and road signs right. The only questions I got wrong were the rules around driving with a G1 & G2. Anyway, I went back the next day and secured my M1 and called around to book my bike course. The day after that I bought my very first bike! A Suzuki Marauder 250!

While we waited for me to take my M2 course, the weekend of July 21st, Andy would ride my bike down to an empty parking lot and I’d drive the car so I could learn some basics. I really didn’t want to show up at the course and not even know what it felt like to ride my own bike. The one thing that Andy was insistent on was not teaching me to much. He didn’t want to teach me any bad habits that he’d picked up over his years of riding and I was ok with that answer. One thing that I did learn was riding a bike was a lot harder and tiring than I ever thought.  By the end of the weekend I was having a blast, turning to the right and left, changing gears, learning emergency stopping. I’m happy to say that at the end of the weekend I passed the ministry test and was on to my M2. 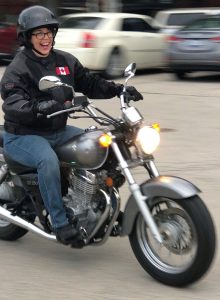 I still had to had to wait until September 7th until I could ride without the M1 rules which i learnt was a very good thing. Every chance that we got we were out on the bikes. Just when I thought I was doing ok I would make a mistake. One of the things we were told repeatedly in our course was to look where you want to go not where you’re trying to avoid. I learnt this the hard way – I hit a parked car turning out of our laneway. Thankfully I wasn’t going fast but I was turning and watching the car and not the street and then I panicked. Andy was able to hop off his bike and came running, and one of the neighbours that was out came running to check that I was ok. We picked up the bike, got it off the road and went looking for the car owner (there wasn’t any damage to the car but it’s the right thing to do) and after he asked if I was ok he asked about the car and said “no worries and ride safe”. As we walked back Andy was worried that I’d want to put the bikes away but I was positive that I wanted to continue on. Looking back I’m glad I did because if I would have gone in the house I’m not sure that I would have gone back riding. As a new rider you lean quickly it’s not if you drop your bike but when and so many other riders have told me the same thing. By the time we got home that night I was a bit sore and when I went to change I understood why. As the days went by the bruises got worse and worse. Seeing as it was hot I wore tanks out of the house but not shorts and I had people stop and ask me if everything was alright and did I need help, Andy wasn’t a fan of going places with me during these two weeks. I will add that every night I was back out on my bike though 🙂

after I got home

What I looked like after 2 hours. I think the bruises on my arms were from my mirrors. It’s the only thing that I could figure out.

it’s not if you drop your bike but when

We continued to ride a lot over the rest of the summer and fall. At the end of September I did my first solo trip to my Dad’s (roughly 3.5 hours away) and when I came back I bought my second bike. I still have a lot of learning to do but am very comfortable riding now and since I’ve started riding my own bike I haven’t had any more anxiety issues when riding. I’m not saying this is the answer for everybody but it was the answer for me.

All so often when we talk about hitting the open road its destinations, routes, fuel...

These leggings are my go to riding pants. They’re super comfortable and fit amazingly well....